This was the first Macworld (Steve Jobs Keynote) that I actually kept tabs on since switching over to Apple hardware last year. I had watched recordings of the previous events and this year definitely did not top the last 2. I mean, Randy Newman was the one more thing which I thought was pretty lame and didn’t really serve any purpose to the event. Nonetheless I’m really happy about about a couple of the new things: 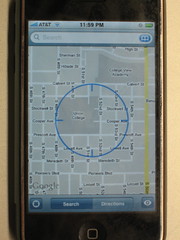 I got an iPhone for Christmas and have been extremely happy with it and the new update (1.1.3) brings even more to the table than I originally had. The triangulation feature added to the maps was a big plus. It’s not nearly as accurate as my Garmin GPS but it works pretty well and got my location down to a couple of blocks. Even so, it’s a whole lot better than trying to figure out what intersection you are on for manual input. I have not noticed any differences after enabling “Show Traffic” on the maps but my college town probably isn’t big enough to have that monitored anyways. I will have to give it a try next time I go home in Denver. Other than that, the functionality is now on par with Google’s web interface with the ability to change between 4 different views (map, satellite, hybrid, and list), and easier searching.

I am excited about this. I find that I usually only watch a movie once so buying movies from iTunes is ridiculously expensive if I’m only going to watch it once, so this cheaper alternative will be a welcome thing. With the added bonus of being able to add it to my iPhone it sweetens the deal even more. For example, I could spool up a couple of movie rentals to watch over a flight and not have to pack anything besides my phone. Of course that is theoretical, I would probably still lug around my 80GB iPod for my music collection.

MacBook Air – There certainly was something in the air and the MacBook Air is another computer that I can’t afford but can drool at along with the new Mac Pro lineup. It’s brings pretty impressive specs to the table considering it’s small package. If I was made of money I would definitely snatch one up and make it my class and travel computer so I wouldn’t have to carry my 17″ MacBook Pro everywhere. Because of the high prices (especially with a solid state drive), I think it may be a little difficult for this product to take. It’s catering to a very specific set of customer, one that travels a lot and needs portability over functionality.

I only have one gripe about the MacBook Air–there doesn’t appear to be user serviceable parts. From what I can tell I would not be able to easily add my own after market, reasonably priced solid state hard drive without voiding the warranty. That’s something I would not feel comfortable doing after dropping over $1,500. Other than that I would be able to get used to the limited number of ports and processing power. This is intended to be used an ultra-portable computer, not a desktop replacement!

All in all, even though it wasn’t the best keynote there’s still some cool technology coming out of Cupertino and I’m excited to see what’s yet to come as the year progresses. I’m especially looking towards more applications for the iPhone.

0 comments… add one
Advertisement Free Google Searches!
Getting Around a College Firewall and Bandwidth Throttling