I told myself that the 17″ MacBook Pro I bought last June, nicknamed Excalibur, would have to last me for at least 3 years until I get out of college. 10 months later and I’m already getting jittery because I haven’t gotten my semi-annual dosage of new computer toy. To appease the raging desire to go out and buy a brand new Mac Pro I decided to upgrade the RAM in my machine from 2GB to the 4GB maximum, but I wanted to make sure that I really needed it so I commenced a simple test.

How exactly do you break a Macbook Pro? Run multiple instances of Windows and Java! I managed to take this screenshot about 30 seconds before the computer fell to its knees and simply quite working. 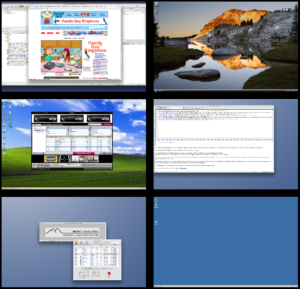 Surprisingly, up until the MBP threw up it’s hands in disgust, everything was operating relatively smoothly. The flash video and music players were not skipping, photoshop and dreamweaver were responding although slow. MenuMeter’s report of 317MB of free RAM was horribly inaccurate which is why I opened up Activity monitor which showed that there was minimal free RAM and a swap size of 6GB and rapidly growing. There’s nothing like hard drive thrashing to break a computer.

Although it was very unlikely that I would need to run so many virtual machines at one time I still had to buy something! I ended up buying the 4GB upgrade kit from Crucial for only $106. I wish it were a happily ever after story but I ran into some very odd kernel panics immediately after upgrading.